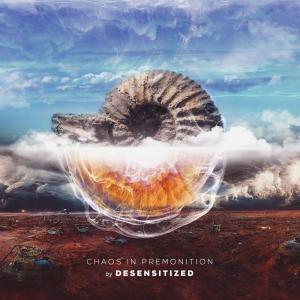 Chaos in Premonition is an album that invites contradictions and makes peace with them. Released today by Desensitized. 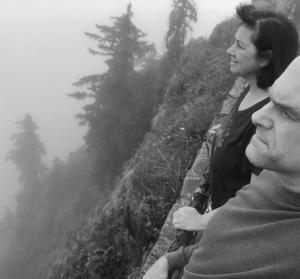 From asynchronous perspectives comes sonic synchronicity; Desensitized takes in the view from the summit. 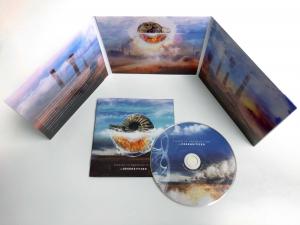 Nine pieces from edited improvisations, blending instrumentation such as clay ocarinas, flutes and Tibetan bowls with a variety of digital and analog synthesizers.

The duo, Deborah Martin and Dean De Benedictis, bring an otherworldly tableaux to life with an array of acoustic instrumentation and synthesizers.

Evolving out of the 'chaos' of thoughts transforming our collective ideas into their compositional form... That is what I find most exciting, the endless potential and possibility.”
— Deborah Martin
PORTLAND, OR, USA, October 20, 2022 /EINPresswire.com/ -- Inspired by the mysteries of the afterlife, Chaos In Premonition takes listeners back to the fantastical realms that Spotted Peccary artists Deborah Martin and Dean De Benedictis built in their first collaboration as Desensitized, the 2020 release Hemispherica Portalis (Portal of 1000 Years). As with that project, Martin and De Benedictis recorded their latest release live in the studio together, forming nine original pieces from edited improvisations with acoustic instrumentation such as clay ocarinas, flutes and Tibetan bowls and a variety of digital and analog synthesizers. The album is available worldwide today in CD and digital formats: 24-Bit Audiophile, CD Quality Lossless, MP3 downloads, or streaming on the platform of your choice: https://orcd.co/desensitized-cip

“The title ‘Chaos In Premonition’ was cast upon the realization of uniting our intuitive natures during the collaborative process; evolving out of the 'chaos' of thoughts transforming our collective ideas into their compositional form," Martin says, going on to describe the joy of collaboration as discovery; as each artist brings their own unique identity, how their compositional styles will blend is a mystery until uncovered. She continues: “That is what I find most exciting, the endless potential and possibility.”

The title track “Chaos In Premonition” begins in quiet vastness and rises to a bewildering crescendo, then fades to an ethereal chorus. Percussive chimes like raindrops in a cavern rise slowly from shadowy depths, evoking the cosmic. From there, the piece builds a sonic mosaic of skittering breakbeats, glitched fragments and glimmering arpeggiations: the birth of a world from quietude. On “Abundant Time” counter-rhythmic clock samples and heartbeats ebb and flow around sinuous drones and gently plucked strings. The two artists employ a rich amalgamation of acoustic and electronic elements throughout the work. With “Immortals And Their Graves,” De Benedictis’ Mayahachi flute moves from calm lulls to sweeping trills to rhythmic stutterings and back again, capturing in its amorphousness the peaks and valleys of a life. Even vocal elements appear in the finale “Sleep Of Innocence” which finds Martin and De Benedictis harmonizing over celestial chimes, an otherworldly lullaby.

On Chaos In Premonition, the accomplished duo weave the ancient and futuristic into an otherworldly tapestry all their own. From asynchronous perspectives comes sonic synchronicity. De Benedictis says “the essence and originality of Desensitized lies in how Deborah and I are so different.”

Martin adds "Growth as an artist requires getting out of your comfort zone; to push boundaries to see what the potential outcome could become. Chaos In Premonition was such a project - this collaboration became an adventure to reach beyond past projects, exploring the nature of the sounds and recordings, taking the leap to create a new theme as an expansion from the Hemispherica Portalis (Portal of 1000 Years) release, a pathway leading from there with a much deeper and introspective journey."

Chaos in Premonition is an album that invites contradictions and makes peace with them, thanks to the masterful approach of its creators.

Spotted Peccary Music will live stream the album throughout the day on SPMLive: https://linktr.ee/ambientelectronic.tv

Recording under his own name, as well as the alias "Surface 10," Southern California based composer and electronic musician Dean De Benedictis has been exploring all corners of the ambient music genre since 1996. Dean's interest in a variety of styles and cultures enriches the quality of his musical expression as he searches for common threads within the fabric of differing genres, drawing from them a natural sense of emotion, expanse and mystery.

Whether collaborating with other artists or working on her own projects, Deborah Martin has been inspiring listeners with her graceful musical journeys on the Spotted Peccary label since 1994. Often powerfully deep, and occasionally playful and carefree, Deborah's music is always rich and simply beautiful, offering crystal clear visions and magically compelling voyages through an inner realm of ethereal visions, ancestral legends, and timeless places.

Together as Desensitized, the two artists share a common vision to partake in the sublime retreat of sonic beauty, transitioning between elements of the natural world and auspices of modern technology. Their albums, Hemispherica Portalis (2020) and Chaos in Premonition (2022), are part of a trilogy.

Chaos in Premonition: Inspired by the mysteries of the afterlife

For inquiries or corrections to Press Releases, please reach out to EIN Presswire.
✕
× Close Ad